When perusing the Casa Gangotena Restaurant menu, you may wonder what is implied by the phrase cocina mestiza. This is the name used to describe our style of cuisine – a blend of traditional dishes made with fresh, native ingredients, featuring incredible colors, flavors, and textures, spotlighted through modern culinary techniques. In essence, cocina mestiza is a singular dining experience that can only be enjoyed here, at our restaurant. The sensational concepts, quality ingredients, and sheer variety of offerings are a testament to the intricate levels of detail and perfection that have become synonymous with Casa Gangotena’s Restaurant. 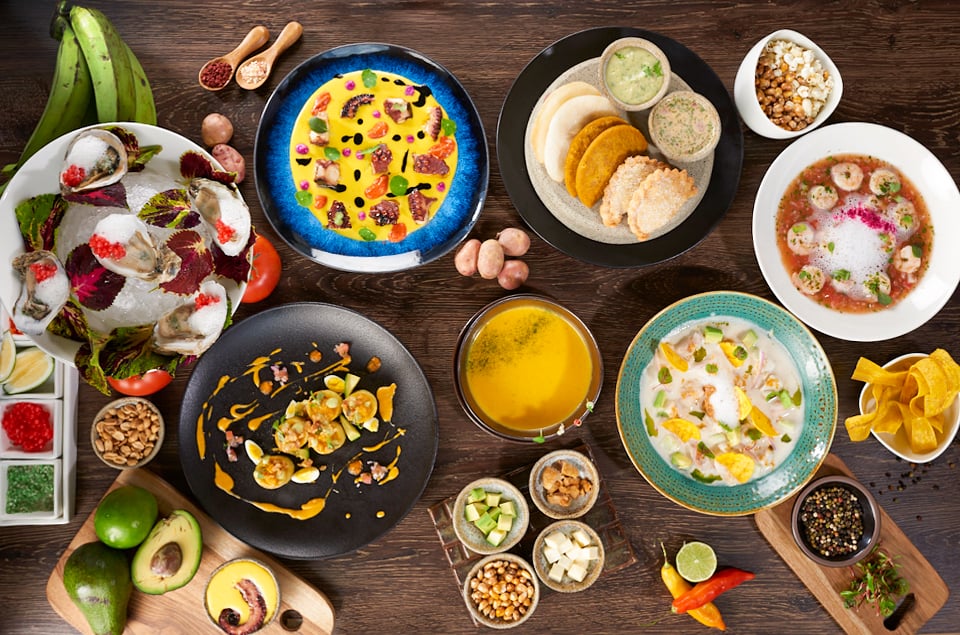 What does cocina mestiza mean in English?

Luckily, we can easily translate cocina to “cuisine;” however the word mestiza is a little more complicated. A direct translation would tell you that it means “of mixed origin” – probably not the best translation for food!

We could loosely say that it means “mixed,” but that simply doesn’t do justice to the depth of the word in relation to the menu at Casa Gangotena. In reality, it represents the unique blend of wonderful cultures at different times in history – a tribute to Ecuador’s rich indigenous ancestry and strong European heritage. However, without knowing the backstory, it is hard to truly appreciate the exquisite experience that is cocina mestiza, which leads us to the following…

What is Ecuador’s gastronomic history?

Ecuador consists of four distinct regions. Culture and food vary quite a bit between each of these. Historically, the journey from the highlands to the coast or to the Amazon was long and arduous. The Galapagos were even more difficult to get to, as they were only accessible by plane or via a very long voyage by sea. Prior to the advent of engines, roads, and all the corresponding infrastructure, people settled in a specific region and rarely ventured far from it. This resulted in the evolution of specific traditions, distinct cooking styles, and varied diets, suited to their particular environment, topography, resources, and climate.

Indigenous tribes stuck to root vegetables, like cassava, and grains, such as quinoa, readily available in their region. They primarily ate fish and the occasional animal successfully hunted. In the 16th century, the Spaniards arrived and conquered the Inca Empire and, by extension, several local indigenous tribes. Along the way, they introduced culinary dishes from Europe, which included a lot of meat and poultry: beef, lamb, pork, and chicken. This influential event would forever change culinary styles, concepts, and food preparation throughout Ecuador.

The world has become infinitely smaller thanks to the accessibility of air travel, and the vast sharing of information via the Internet. Many people from all over the world have relocated to Ecuador, bringing with them recipes for dishes and cooking techniques from places like Europe, North America, and Asia. Conversely, in today’s day and age, there is an endless amount of information and media available online, focusing on exciting new culinary ideas. The introduction of these new concepts has led to yet another new dynamic in Ecuadorian cuisine.

Our cocina mestiza expertly blends the largely vegetarian diet and cooking styles of the country’s first indigenous tribes with the more diverse European cuisine and premium cuts that were introduced along with it, creating an unparalleled dining experience that meshes many cultures together with unique ingredients sourced from different parts of Ecuador.

What is Casa Gangotena’s Restaurant dress code?
At Casa Gangotena, we don’t have a dress code! We strongly recommend you dress as comfortable as possible in order to enjoy the wonders of Quito’s Historic Center before or after your visit to our restaurant.

What are some examples of cocina mestiza?

While sitting in the comfort of the magical Casa Gangotena Restaurant, you can enjoy delicious Galapagos lobster (when in season) or equally tasty prawn from the Ecuadorian Coast, prepared in a traditional coconut, or encocado, sauce from the province of Esmeraldas. This delicious dish, served with ripe plantain, lemon verbena, and rice, spotlights some of Ecuador’s most recognizable ingredients as they shine with every bite.

Another sought-after dish on the cocina mestiza menu is the Pistachio Lamb. This delicious Andean chop is enveloped in an unforgettable pistachio crust, accompanied by a creamy sweet potato and ginger purée with a rosemary and sage infusion. This incomparable treat will have your taste buds begging for more!

Some menu items may be a little hard to explain as the herbs and vegetables used are native to the area and aren’t commonly found outside Latin America. One example of this is the Andean Salad featuring a trio of red, white, and black quinoa, with chochos (lupin beans) and an ataco vinaigrette, which also incorporates fresh mashuas (a tubular vegetable native to the Andes, similar to a yam).

Fun fact: You will probably never have a chance to taste this vegetable outside of Ecuador’s highlands!

At Casa Gangotena, regional flavors come alive in our traditional dishes. Take, for example, our Citrusy Shrimp Ceviche. This Quiteño-style favorite features a refreshing citric orange and tangerine base, fresh tomato, and lemon foam. Toasted corn nuts, popcorn, and homemade plantain chips are the perfect complement to this popular offering.

The chefs at the Casa Gangotena Restaurant are constantly finding ways to improve on popular and traditional dishes. This is perhaps best exemplified by their reimagining of an Ecuadorian favorite: Potato Pork (Papas con Cuero). Textured cylinders of roast potato and pork belly confit are topped with a creamy peanut sauce and served with sliced avocado and boiled quail egg.

What other aspects distinguish Casa Gangotena’s cocina mestiza from every other restaurant?

In addition to the perfect blend of local ingredients, traditional recipes, and cultural influences, cocina mestiza also employs incredibly unique plateware. Calling upon Ecuador’s volcanic origins, the dishes used at Casa Gangotena’s Restaurant are partially made with basalt and granite. Each one contains a graphic representation of the San Francisco church in homage to Casa Gangotena’s iconic neighbor. Incredibly enough, no two plates are the same, resulting in cocina mestiza’s stunning visuals.

Casa Gangotena’s cocina mestiza is an authentic gastro-sensorial tribute to the best local and regional ingredients prepared with true culinary expertise, offering guests the opportunity to experience Ecuador’s rich culinary traditions through a modern lens, in an elegant and comfortable atmosphere. Every flavor, every sauce, and every spice has been expertly chosen to represent the very best of Ecuadorian gastronomy. More than just a menu – cocina mestiza is an intricate blend of traditional flavors and the very essence of a truly mouthwatering dining experience.

previousWhat is the history of Casa Gangotena?

nextWhy is Casa Gangotena one of the most romantic hotels in Quito?